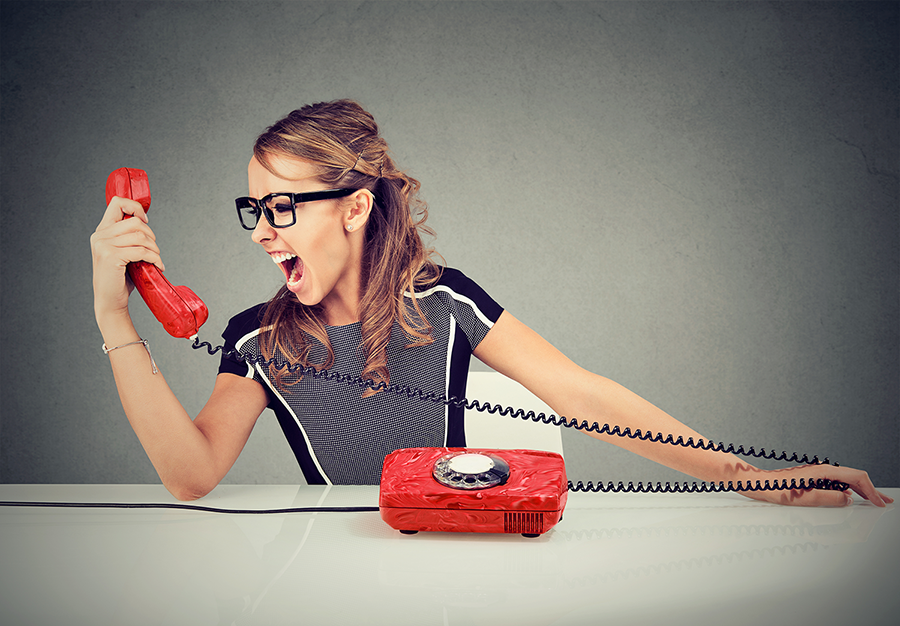 Triggered by the 7 Service Triggers: Know What Sets Your Customers Off

Triggered by the 7 Service Triggers: Know What Sets Your Customers Off

Everyone has a pet peeve.

For me, it’s loud chewing.

I (and I cannot stress this enough) absolutely hate when someone obnoxiously chomps away on their food.

Shockingly, I’ve encountered plenty of people who are completely unphased by crunching chips and slurped-up soup.

HOWEVER, there are infractions that are guaranteed to annoy just about anyone.

For example, imagine reaching your hand underneath the dispenser only to realize that there’s no toilet paper left on the roll…

That, my friends, is something that would frustrate us all.

In the world of customer service, we like to call these universal irritants “triggers.”

At #SmallBizCX19, I had the chance to sit down with author and mastermind behind the development of the 7 Service Triggers, Adam Toporek, to talk about how the 7 Service Triggers came to be and to discuss what companies can do to prevent those triggers from having a negative impact on their customers’ experiences. 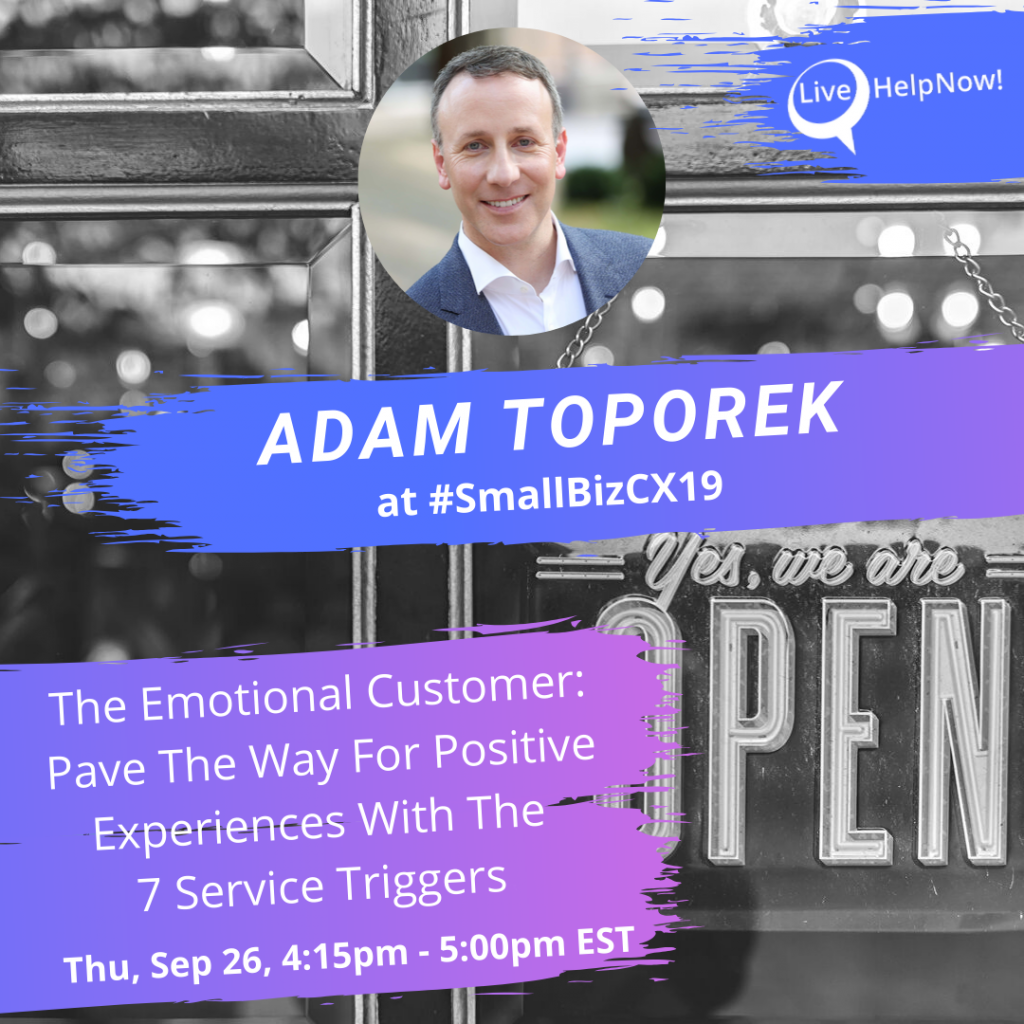 How the 7 Service Triggers Came to Be

Adam introduced the 7 Service Triggers to the world when he published his book, “Be Your Customer’s Hero,” but that’s not where the list of hot buttons originated.

Excited to get my autographed copy last night of “Be Your Customer’s Hero” by @adamtoporek. He delivered a great Key Note presentation at #CCWAustin18 pic.twitter.com/v6LYqqB9H0

The triggers were actually inspired by Adam’s real-life experiences in the customer-service trenches.

This was his response when I asked him about the birth of the concept:

“So, really it comes from my background in small business…because it came from observation and seeing these things that seem to be repetitive feelings that customers would have…like being ignored. [It comes from] looking at patterns in retail and small business and seeing…what are the common things that tend to frustrate customers?” said Toporek.

“What are the common things that tend to frustrate customers?”
– Adam Toporek

He went on to further explain that there’s a big difference between personal triggers (a.k.a. pet peeves) and common, shared triggers.

“Obviously, customers are human beings. Everybody has their own personal hot buttons. So, there’s a difference between personal triggers and common triggers. In the end, after working on it over time and thinking about it, I distilled it down to 7 that I found were really prominent…that really were common across industries, across B2B vs. B2C…you saw them pretty much everywhere.” 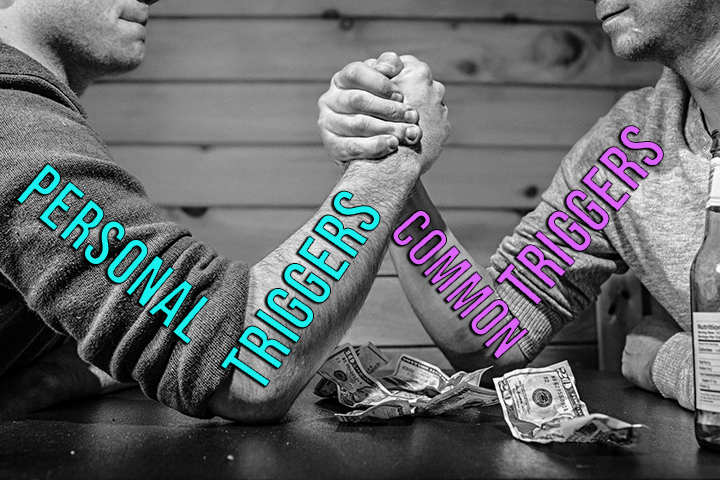 He and his team at CTS Solutions even conducted research to confirm the relevance of his observations (you’ll see the results in the infographic in the next section).

“Eventually, even though I came up with the concept sort of out of my head, we did do some research to verify whether this was true or not, and we found that they were all very prominent.”

So, without further ado, here are the customer service equivalents of an empty toilet paper roll…

What are the 7 Service Triggers?

The 7 Service Triggers along with an example for each:

The Most Common of the 7 Service Triggers May Surprise You

Common sense would lead us to believe that acknowledging a customer’s presence is a fundamental element of proper customer service etiquette.

That’s why it was so shocking to find that the most frequently reported trigger is “being ignored.”

Unbelievably, 86% of customers feel they have been ignored at one time or another (CTS Service Solutions).

Unbelievably, 86% of customers feel they have been ignored at one time or another. @adamtoporek Click To Tweet

Think about it. Have you or your team members ever failed to greet a customer as they entered your establishment? Have you ever forgotten to return an email or a voicemail?

Chances are “being ignored” happens way more than we think it does, and all these small infractions add up!

Even worse, it makes customers feel unimportant and unappreciated.

Incompetence is Just As Annoying

Equally surprising is the second most prevalent trigger: “being faced with incompetence” takes the #2 spot.

In fact, 84% of customers report encountering employees that lack the required knowledge to properly assist them. (CTS Service Solutions).

84% of customers report encountering employees that lack the required knowledge to properly assist them. @adamtoporek Click To Tweet

Now, imagine going into a pancake house and then finding out they don’t know how to make pancakes.

When you look at it from that perspective, it’s easy to see the HUGE role that staff knowledge plays in creating a positive customer experience.

Plus, there’s plenty of research to back up the pertinence of having a thoroughly trained staff.

For example, a recent study by American Express found that 62% of customers said that the key to their positive experience was due in part to the rep’s knowledge or resourcefulness.

It’s All About The Emotions that the Triggers Trigger

In the grand scheme of things, it’s not about the triggers at all.

(I know, I know…I just spent a ton of time explaining why the 7 Service Triggers are so important.)

The triggers can conjure feelings of frustration, worry, fear, confusion, helplessness, or anger…the list of negative sentiments could go on.

And, any type of “bad” emotions that you provoke within your customers is just downright bad for business.

Stay on Your Customer’s Bright Side

On the bright side, peak-end rule also indicates that creating positive emotions within our customers will have a positive effect.

That same Temkin Group study also found that a customer that has a positive emotional experience is also 6x more likely to forgive if something goes wrong.

“If someone is 6x more likely to forgive you, how much easier is that job?” points out Toporek.

“If someone is 6x more likely to forgive you, how much easier is that job?”
– Adam Toporek

That’s the power of preventing negative emotions and avoiding the 7 Service Triggers.

For more on the 7 Service Triggers and how to prevent them, check out Adam Toporek’s book, “Be Your Customer’s Hero” or check out his website customersthatstick.com.

Be sure to check out our full discussion of the 7 Service Triggers during Adam’s #SmallBizCX19 session on LiveHelpNow’s YouTube Channel.